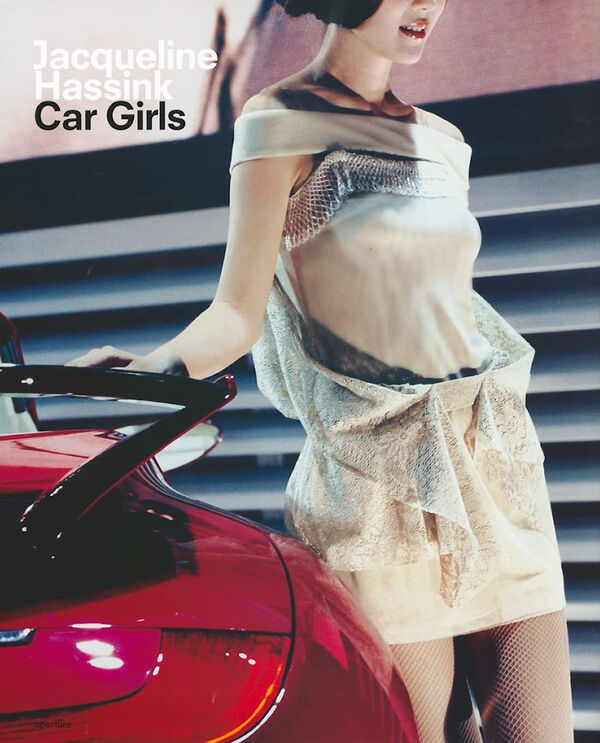 184 pages, 28.7 x 35 cm , 2015 g.
Jacqueline Hassink | Aperture
Jacqueline Hassink – Car Girls
Was €85.00 €35.00
Including VAT, plus Shipping
Transit time: 2 to 6 business days (worldwide)
Add to cart    Add to wishlist
Dutch artist Jacqueline Hassink has received critical acclaim for her books and exhibitions that deal conceptually with issues of power and social relations. Car Girls is a body of work that Hassink has created over five years, photographing major car shows in seven different cities on three continents. As she describes it, she has used these sites to reflect on "differing cultural values with regard to their ideal images of beauty and women.

The series captures the moments during the women's performances when they become more like dolls or tools than individuals." In an issue of Aperture magazine, Francine Prose praised the work for its ability to "make us rethink the association between auto and eros as if it had never occurred to us, and to see it newly in all its sheer outrageous strangeness." Car Girls takes a subversively fun yet conceptually astute approach to issues of gender, power, and commodification. This luxuriously produced publication is designed by award-winning designer Irma Boom, and is limited to an edition of 1,500 copies.

Jacqueline Hassink (born in Enschede, the Netherlands, 1966) books include The Table of Power (1996), Mindscapes (2003), The Power Book (2007), and Tables of Power Vol. II (2011). Her photographs have been shown worldwide, and are in the collections of the Huis Marseille, Amsterdam, and the Victoria and Albert Museum, London, among other institutions. A visiting professor in the postgraduate photography program at the University of Art and Design, Helsinki, and the Visual and Environmental Studies program at Harvard, she is represented by Benrubi Gallery, New York.