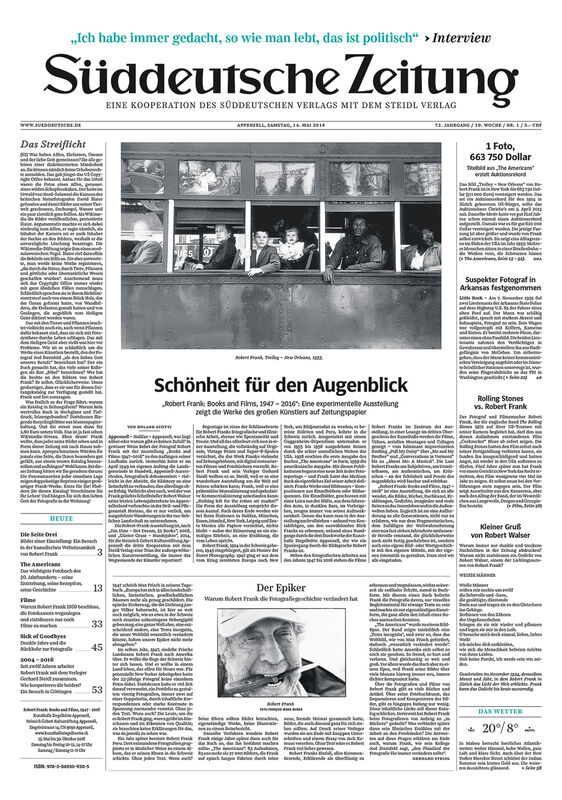 64 pages, 40 x 57 cm , 372 g.
Robert Frank | Steidl
Robert Frank – Books and Film 1947-2014
Süddeutsche Zeitung (deutsche Ausgabe)
€10.00
Including VAT, plus Shipping
Transit time: 2 to 6 business days (worldwide)
Add to cart    Add to wishlist
This is the unconventional catalogue of the exhibition “Robert Frank, Books and Films, 1947–2016,” a special edition of the German newspaper the Süddeutsche Zeitung―following its original design and format, and printed on newsprint. Conceived by Robert Frank and Gerhard Steidl, the exhibition presents Frank’s iconic images in the context of his life, creative processes, and wider cultural history. Here Frank’s books and fi lms are seen against the backdrop of his photographs, which are presented in an immediate and straightforward way: printed on up to three-meterlong sheets of newsprint and installed directly onto the wall, without frames.

The newspaper catalogue recreates the raw, innovative approach of the exhibition. Featuring interviews, essays, letters and opinion pieces alongside rich picture sequences, Robert Frank: Books and Films, 1947–2016 is an unpretentious and accessible printed object―or in Frank’s own words: “Cheap, quick and dirty, that’s how I like it!”