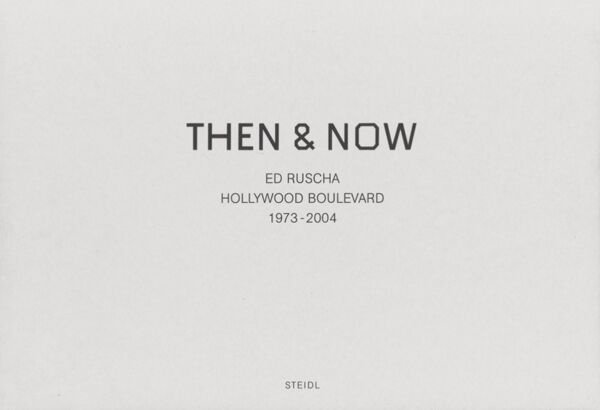 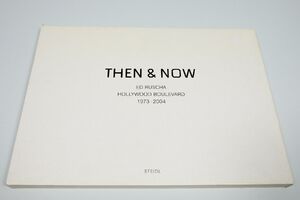 Ed Ruscha | Steidl
Ed Ruscha – Then & Now
Hollywood Boulevard 1973-2004
€225.00
Including VAT, plus Shipping
Transit time: 2 to 6 business days (worldwide)
Add to cart    Add to wishlist
Between 1962 and 1978, Ed Ruscha produced eighteen small artist's books. Usually self-published and in small print runs, these publications have become seminal works in the history of conceptual art and the photography book. THEN & NOW is the first artist's book that Ruscha has independently created since 1972.

One of the most well-known of Ruscha's books from that early period is "Every Building on The Sunset Strip", showing a famous stretch of real estate along Sunset Boulevard in Los Angeles, published in 1966. In July, 1973 he followed the same procedure while documenting Hollywood Boulevard.

Loading a continuous strip of 33 feet of Ilford FP-4 black & white 35mm film into his motor-drive Nikon F2 and then mounting it on a tripod in the bed of a pickup truck, he drove back and forth across the 12 miles of the street shooting, frame-by-frame, both the north and south sides of its entire length. The negatives were developed, contact sheets were made, and the materials were placed in storage.

Thirty years later, in 2003, a digital record of Hollywood Boulevard was created and it served as a reference guide for the traditional film/still documentary of 2004. For this shoot, the same type of camera equipment was used to re-photograph the street on 35mm color-negative film.

The resulting material of both shoots — 4500 black & white and 13,000 color images — have been scanned and digitally composed into four panoramics of the complete 12 miles. In THEN & NOW, the original 1973 North side view is shown along the top of the page and juxtaposed with its 2004 version underneath. Along the bottom of the page, you find the original 1973 South side view shown upside down, also juxtaposed with its 2004 version. The panoramics face each other and they are aligned.

The result is what Ruscha refers to as a "piece of history...a very democratic, unemotional look at the world." While it is a significant historical document which succinctly conflates and renders the passage of time, it is also a project that spans the career of one of the truly original artists of our time and brings his work full circle.