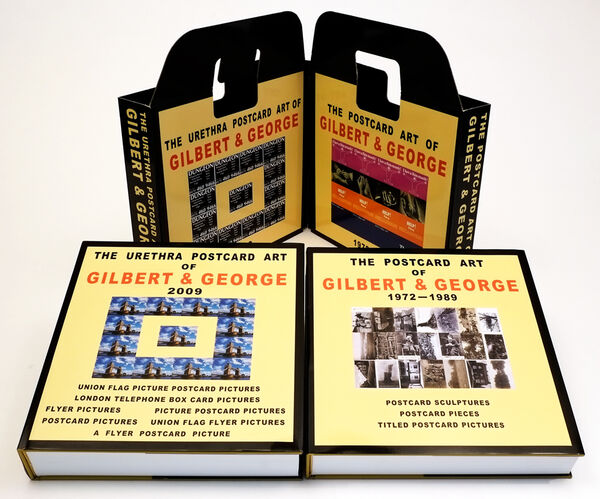 Gilbert & George (*1943/*1942) have carved a permanent place in the modern art world. Their enormous oeuvre comprises everything from Living Sculptures, Film/Videos to their large scale Pictures, and confronts all aspects of the human condition with characteristic honesty and clarity. Their Postcard Art is a representation of the themes that have occupied their art for nearly four decades.

This ingeniously packaged two-volume set illustrates in color all 1,004 new and vintage Postcard Pictures, most of which have not been previously catalogued or exhibited. Volume One covers the period from 1972–1989, in groups composed of varying arrangements and romantic and historic subjects and begun shortly after Gilbert & George achieved recognition in the art world. The second volume collects a new and as yet unseen group of 564 Postcard Pictures known as “The Urethra Postcard Pictures” – a uniformly formatted series to be the subject of a world exhibition tour. Each volume is introduced with a perceptive essay by Michael Bracewell, who explains the significance of this art form in the context of the artists’ work.

Ordered around the Union Flag, landscapes, celebrity, royalty, prostitution, tourist destinations, and other concerns, this collection compiles a crucial but largely unseen component of the artists’ important contribution to contemporary art.