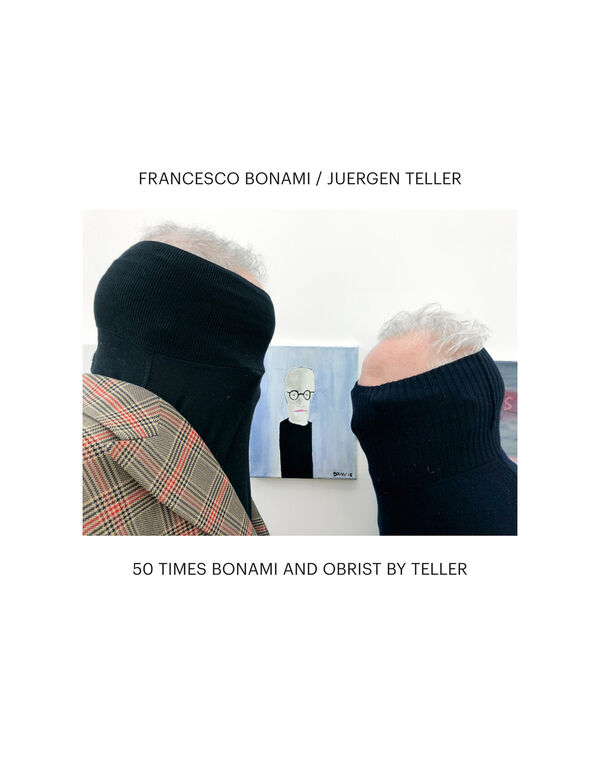 112 pages, 23 x 30 cm , 710 g.
Bonami, Francesco & Teller, Jürgen | Steidl
Francesco Bonami & Jürgen Teller
50 Times Bonami and Obrist by Teller
€25.00
Including VAT, plus Shipping
Transit time: 2 to 6 business days (worldwide)
Add to cart    Add to wishlist
On the occasion of Hans Ulrich Obrist’s fiftieth birthday in 2018, Swiss gallery 107 S-chanf asked fellow curator Francesco Bonami to create a celebratory exhibition. Bonami’s initial idea was to invite 50 artists to create 50 portraits of Obrist in an ambitious collaborative homage. Yet the idea proved a little too ambitious, and Bonami decided to create the portraits all by himself. The gallery provided him with space and materials, and within just two weeks Bonami’s 50 oil paintings were ready—endearing and humorous works, many of which playfully incorporate art figures of the past and present including Edward Hopper, Ai Weiwei and Georg Baselitz.

During the Engadine Art Talks in January 2019 Juergen Teller was invited to view the exhibition “50 Times Obrist by Bonami,” and with characteristic spontaneity he photographed Bonami and Obrist before each portrait. This resulting book, with Teller’s photos on the left-hand pages and Bonami’s paintings on the right, is an unconventional and tongue-in-cheek portrait of a portrait.