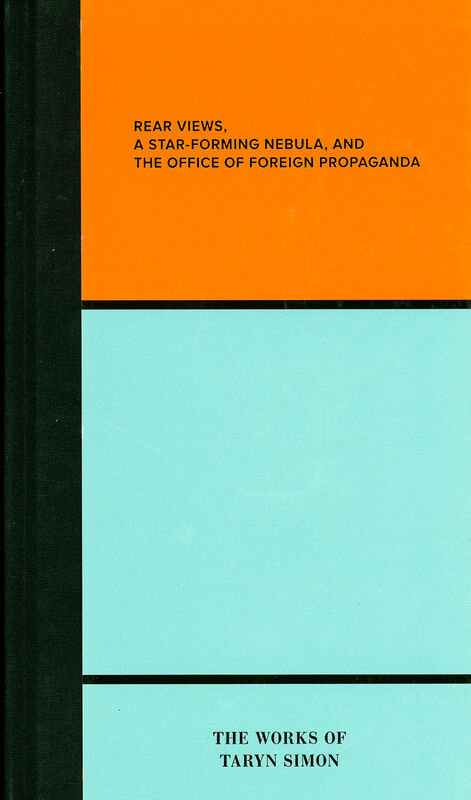 388 pages, 15 x 27 cm , 1416 g.
Taryn Simon | Tate Publishing
The Works of Taryn Simon
Rear Views, A Star-Forming Nebula, and the Department of Foreign Propaganda
Was €40.00 €10.00
Including VAT, plus Shipping
Transit time: 2 to 6 business days (worldwide)
Add to cart    Add to wishlist
A beautiful and uniquely designed survey of the works of Taryn Simon. Documenting her key projects since 2002, this publication also includes texts on the artist’s work from a range of international contributors and an introduction from Simon Baker, Curator of Photography and International Art, Tate.

Born in New York in 1975, Taryn Simon is at the forefront of contemporary photography practice. Her artistic medium is based around three equal elements: photography, text, and graphic design, which combined investigate the limitations of absolute understanding, examining the gaps between each element and how this can lead to disorientation and ambiguity.

Simon’s work ranges in focus and scope from a series of examinations of legal function specific to the United States: The Innocents, An American Index of the Hidden and Unfamiliar, and Contraband; to a four-year examination of politics, history and individual agency on a global scale: A Living Man Declared Dead and Other Chapters; to works based on obscure and little-known stories and archives, addressing the nature of the production and circulation of knowledge: Black Square and The Picture Collection.

Committed but never limited to these concerns, Simon’s work has established her as a pre-eminent exponent of a practice that engages equally with issues of pressing importance in the modern world, and with the politics of representation.

Published in close collaboration with the artist, this publication is the first to draw together Taryn Simon’s diverse and complex range of projects, produced since 2002. With new and published essays by amongst others Salman Rushdie, Homi Bhabha, Daniel Baumann, Tim Griffin, Tina Kuklieski, Hans Ulrich Obrist and Elisabeth Sussman. With an introduction by Simon Baker, Curator of Photography at Tate Modern.