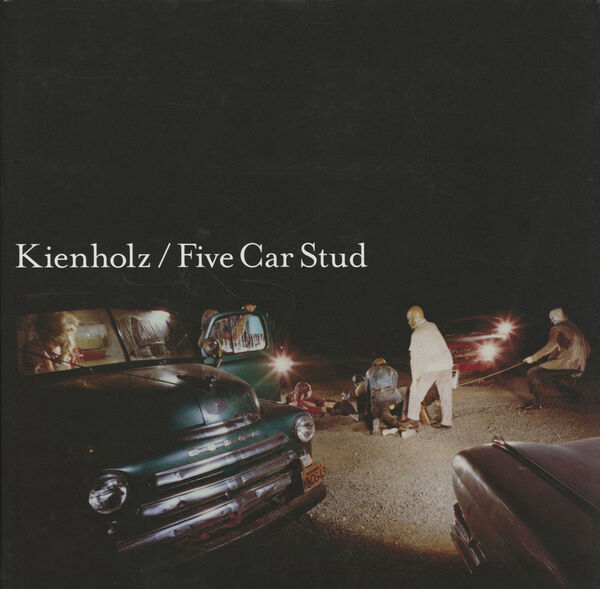 The life-size tableau depicts four automobiles and a pickup truck, arranged on a dirt floor in a dark room with their headlights illuminating a shocking scene: a group of white men exacting their gruesome “punishment” on an African American man.

“Five Car Stud” is a harsh reminder of a shameful part of American history whose traces still linger. It was seen only in Germany in 1972 and has since remained in storage in Japan for almost 40 years. On the occasion of its first public showing in the United States, this volume examines an extraordinarily powerful artistic statement that has lost none of its potency.

The catalogue presents essays by Roberto Ohrt and Thomas McEvilley, as well as an interview with American artist Paul McCarthy.

A life-sized reproduction of a scene of racial violence, Five Car Stud is considered one of the American artist’s most significant works. Despite the controversy and attention that it earned from critics right from its debut, the piece remained hidden from view in the storage of a Japanese collector for almost forty years. The artwork was only presented once again to the viewing public in 2011 and 2012 following restoration, first at the Los Angeles County Museum of Art and then at the Louisiana Museum of Modern Art in Denmark. Today the artwork is part of the Prada Collection, and is being shown for the first time ever in Italy, where it forms the central nucleus of an exhibition path that runs from the Sud gallery to the Deposito, and extends into an external space, presenting 25 artworks including sculpture, assemblages and tableaux realized by the Kienholzes from 1959 to 1994, as well as documentation material on the history and making of Five Car Stud.

Five Car Stud catapults the viewer into a nightmarish situation, immersing him and her in a dimension – either removed or forgotten – of extreme violence. More than forty years after it was first created, the artwork’s expressive force, its powerful symbolic charge and the lucidity of the accusation against racial persecution retain their original strength.