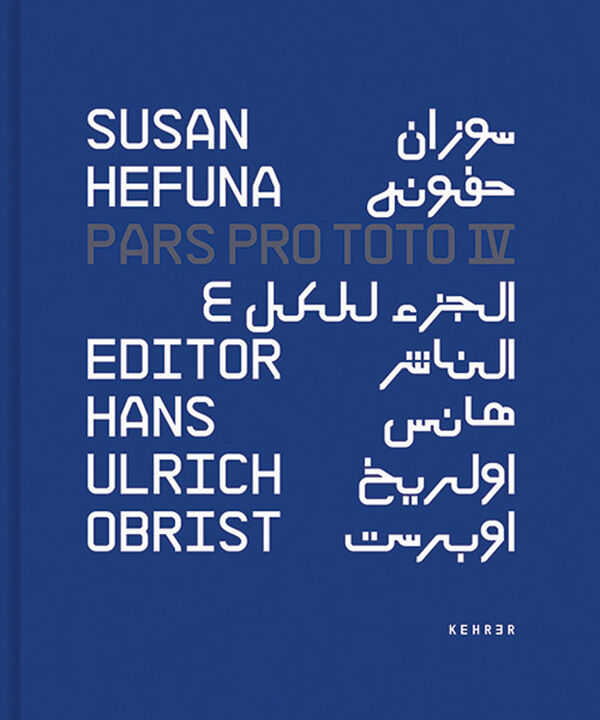 112 pages, 24 x 28.8 cm , 1253 g.
Susan Hefuna | Kehrer
Susan Hefuna – Pars Pro Toto IV
€58.00
Including VAT, plus Shipping
Transit time: 2 to 6 business days (worldwide)
Add to cart    Add to wishlist
The fourth publication in the Pars Pro Toto series deals with the video works by the internationally renowned German-Egyptian artist Susan Hefuna. An interview with the artist by the editor Hans Ulrich Obrist and David A. Ross, Dean of the MFA Art Practice Program at the School of Visual Arts in New York, serves as a guide through the wellknown Crossroads films, which depict passers-by at traffic intersections worldwide, including Cairo, Frankfurt am Main, London, Sharjah, and even Times Square in New York. Each of Hefuna's videos run between 80 and 150 minutes. The films uncover the movements of people in villages or cities moving like a nervous system. All people are connected, each movement of individual pedestrians becomes part of a choreography, although the people seem unaware of being part of that interconnected structure. Hefuna's videos require no post-production, editing or spacial effects. She does not intend to create cinema like movies, rather rough sketches of reality. The movies show life as it is – shot in one go, with digital consumer equipment. The Crossroads videos mark Susan Hefuna's personal relationships to place and time, intersections in life, observed in awareness and filmed without interfering.

Pars Pro Toto IV includes excerpts from the books An Attempt at Exhausting a Place in Paris by Georges Perec (Wakefield Press 2010), and The Palm-Wine Drinkard and My Life in the Bush of Ghosts by Amos Tutuola (Faber & Faber Ltd 1952).