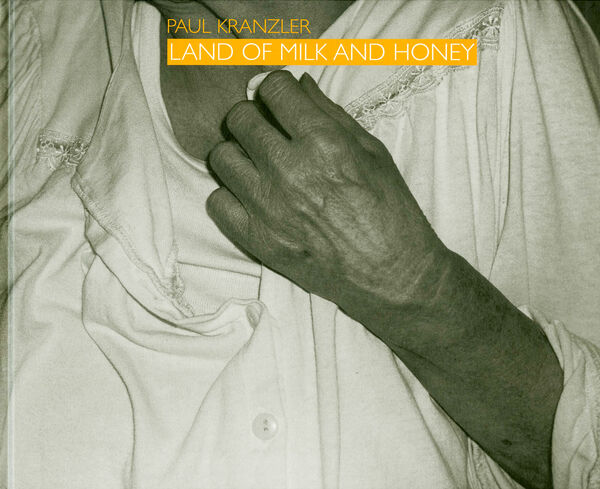 126 pages, 30 x 24.5 cm , 1435 g.
Paul Kranzler | Fotohof
Paul Kranzler – Land of Milk and Honey
€39.00
Including VAT, plus Shipping
Transit time: 2 to 6 business days (worldwide)
Add to cart    Add to wishlist
In October 2001 I was flat hunting for somewhere inexpensive to live. I found out that there were a few rooms for rent on the top floor of a townhouse in Linz, with a communal toilet in the corridor, in stark contrast to the posh doctors’ surgeries on the ground floor. I’d been living there for a year before I got to know Toni and Aloisia better, beyond just saying hello or helping to carry their shopping up the stairs. There was nothing weird about my two neighbours in the rooms next door; right from the outset they were genuinely warm-hearted and friendly towards me. And they were completely normal. Which was why it was often fun to go next door for a chat, a beer or to watch TV. It was an oasis amid the hostile desert of the Land of Milk and Honey. I was allowed to be a part of their lives, and to this day it’s something I’m grateful to them for. Taking the photos was never an issue; they had no reservations – to them I was just the guy who took photos. Lots of photos. The state of the room reflected the state of the person who lived there.

And that’s how I found him one day in the summer of 2003, lying on the floor of his room, in a terrible state after a stroke. Soon afterwards his room was cleared out; we all knew he’d never be able to manage on his own again. He proved to be made of other stuff, thank God; “a bad penny always comes back,” he whispered to me in intensive care. To this day I’ve not idea how he managed to pull through. I, too, moved out of the building soon afterwards. We sometimes meet up again; I go and see him in his new room, and her in her old one; sometimes he even pops round to see her