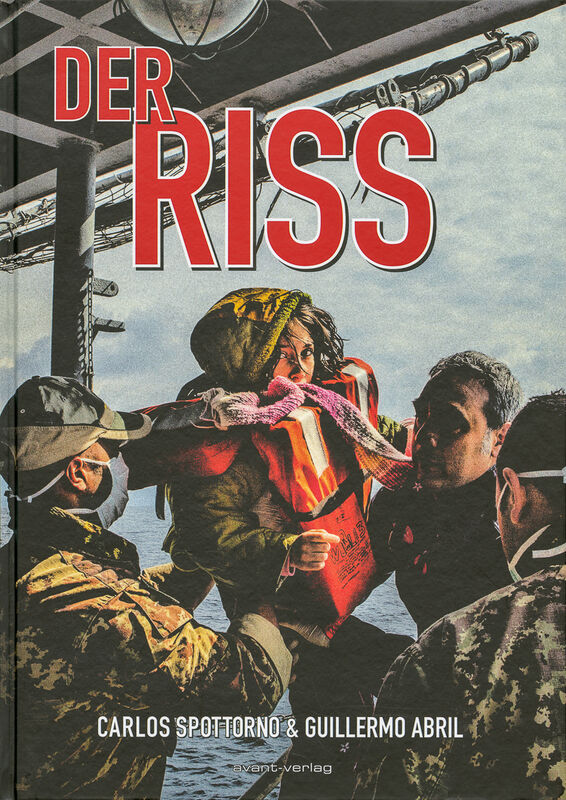 176 pages, 22.2 x 31.7 cm , 1205 g.
Carlos Spottorno | avant-verlag
Carlos Spottorno & Guillermo Abril – Der Riss
(Deutsche Ausgabe)
€32.00
Including VAT, plus Shipping
Transit time: 2 to 6 business days (worldwide)
Add to cart    Add to wishlist
THE CRACK is the field journal of two reporters as they follow the border from Africa to the Arctic with the aim of identifying the causes and consequences of Europe’s identity crisis.

Halfway between a photobook and a graphic novel, the result is not a story based on actual events: these are actual events.

In December 2013 photographer Carlos Spottorno and reporter Guillermo Abril got from El País Semanal the assignment of preparing a series of stories about the European Union’s external borders.

At the time the media’s coverage was focused on the migration flows in Melilla and the Southern Mediterranean. The great migrant exodus in the Balkans, and the attacks in Paris and Nice were still a long ways in the future. The war in Ukraine seemed to have stabilized, and the United Kingdom hadn’t yet voted to leave European Union. These and many other events would take place over the course of time it took them to cover their assignment, which took them all the way from Melilla to the Arctic.

After three years working on the story, several covers, dozens of pages in magazines, and a World Press Photo, the authors set out to convey, with the 25,000 photographs and 15 notebooks they had compiled, the story of what is happening on the European Union’s borders, making use of an innovative narrative form.

THE CRACK depicts in its pages an encounter with Sub-Saharan migrants in the Gurugu Mountain, the rescue of a raft off the coast of Libya, the exodus in the Balkans, NATO tanks on the Byelorussian border, and Arctic forests, where Finn conscripts try to discover their own limits.

THE CRACK is the field journal of two reporters as they follow the border from Africa to the Arctic with the aim of identifying the causes and consequences of Europe’s identity crisis.

This work by Spottorno and Abril is both a photographed news report and a graphic essay of sorts, set against the background of very current geopolitical events. Halfway between a photobook book and a graphic novel, inasmuch as it uses narrative elements of the latter, the end result is not a story based on actual events: these are actual events.