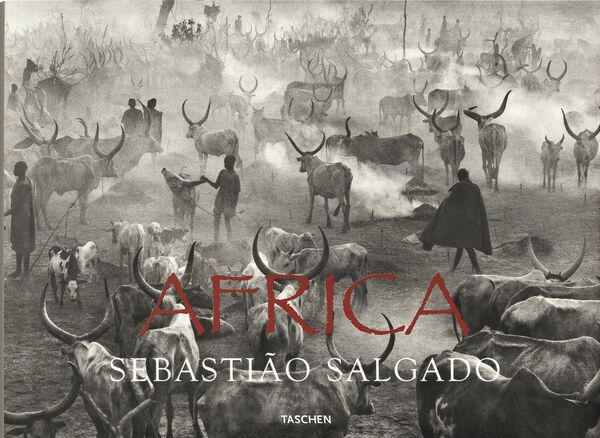 An homage to Africa’s people and wildlife
Sebastião Salgado is one the most respected photojournalists working today, his reputation forged by decades of dedication and powerful black-and-white images of dispossessed and distressed people, taken in places where most wouldn’t dare to go. Although he has photographed throughout South America and around the globe, his work most heavily concentrates on Africa, where he has shot more than 40 reportage works over a period of 30 years. From the Dinka tribes in Sudan and the Himba in Namibia to gorillas and volcanoes in the lakes region to displaced peoples throughout the continent, Salgado shows us all facets of African life today. Whether he’s documenting refugees or vast landscapes, Salgado knows exactly how to grab the essence of a moment so that when one sees his images one is involuntarily drawn into them. His images artfully teach us the disastrous effects of war, poverty, disease, and hostile climatic conditions.

This book brings together Salgado’s photos of Africa in three parts. The first concentrates on the southern part of the continent (Mozambique, Malawi, Angola, Zimbabwe, South Africa, Namibia), the second on the Great Lakes region (Congo, Rwanda, Burundi, Uganda, Tanzania, Kenya), and the third on the Sub-Saharan region (Burkina Faso, Mali, Sudan, Somalia, Chad, Mauritania, Senegal, Ethiopia). Texts are provided by renowned Mozambique novelist Mia Couto, who describes how today’s Africa reflects the effects of colonization as well as the consequences of economic, social, and environmental crises.

This stunning book is not only a sweeping document of Africa but an homage to the continent’s history, people, and natural phenomena.