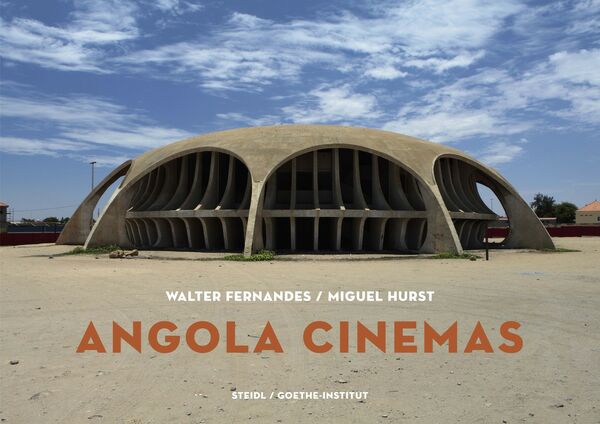 240 pages, 30.5 x 21.7 cm , 1582 g.
Walter Fernandes | Steidl
Walter Fernandes – Angola Cinemas
A fiction of freedom | Uma ficção da liberdade
Was €45.00 €15.00
Including VAT, plus Shipping
Transit time: 2 to 6 business days (worldwide)
Add to cart    Add to wishlist
Angola Cinemas honors the fantastic, unique and little-known architecture of movie theaters in Angola, built in the decades before the end of Portuguese colonial rule in 1975. “Initially designed as traditional closed spaces, later in the 1960s open air cinemas with terrace bars became the order of the day, so much better adapted to the tropical climate. The arrival of these cinemas brought elegance to the business of going to the movies.” (Miguel Gomes, “Cinema from way back when...”)

Yet it is not only this exceptional architecture which impresses us and mirrors the experimental spirit of its ambitious and visionary builders. Visiting the cinema was a communal act—it was a crucible where young met old, where people fell in love and where liberation from colonialism was a feasible option. Examining the architectural history of these buildings, Walter Fernandes’s photographs are documents of urban organization in the twentieth century, and of the changing mentalities of a society living within the possibility of its foreseen independence. What has changed since then, and what is the future of these urban cathedrals? Angola Cinemas poses such questions, both preserving these architectonic treasures and reflecting on their cultural, social and affective heritage.