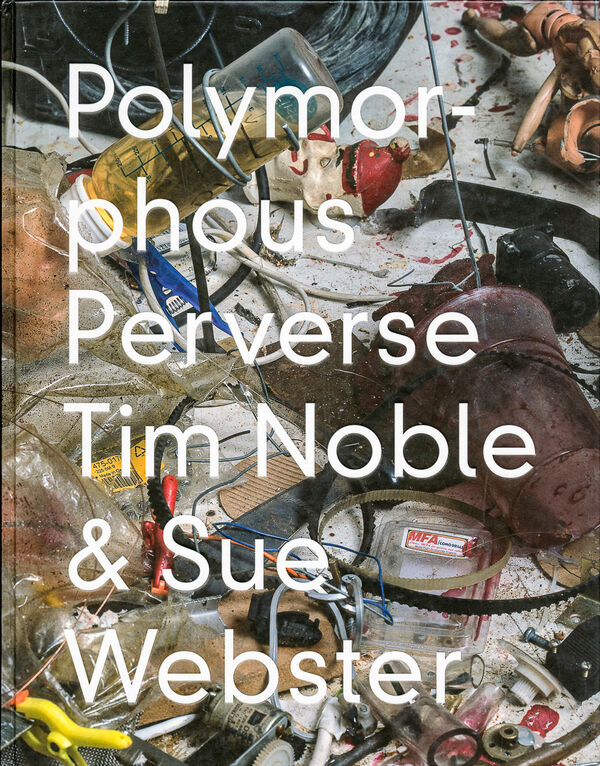 56 pages, 26.4 x 33.6 cm , 770 g.
Noble, Tim / Webster, Sue | Other Criteria
Tim Noble & Sue Webster – Polymorphous Perverse
€15.00
Including VAT, plus Shipping
Transit time: 2 to 6 business days (worldwide)
Add to cart    Add to wishlist
According to Sigmund Freud, young children are, by nature, "polymorphously perverse" and while their infantile sexuality is swiftly suppressed it is retained in their unconscious adult minds. Tim Noble and Sue Webster’s new publication documents in beautiful detail their critically acclaimed site-specific project at the Freud Museum, which was nominated for the prestigious South Bank Prize in 2007. This includes one of their characteristic self-portrait shadow sculptures ‘Black Narcissus’, a plethora of silicone rubber casts of Webster’s fingers and Noble’s member in various states of arousal which was installed in Freud’s study.

There is also detailed documentation and analysis of their complex kinetic sculpture ‘Scarlett’ that was appropriately sited in the bedroom of Freud’s daughter, Anna, the founder of child psychology. Created from modified children’s toys and machine parts, ‘Scarlett’ utilizes the actual workbench from the artists’ studio, which they have used extensively over the past decade. Triggered by sensors the individual elements of this hybrid machine sculpture become animated to produce a dream-like cornucopia of repressed sexual and sadomasochistic fantasies and transgressions. The publication also provides a fascinating insight into Freud’s theories and how they relate to art practice with critical essays from the distinguished American art historian Linda Nochlin and James Putnam who curated the original exhibition.