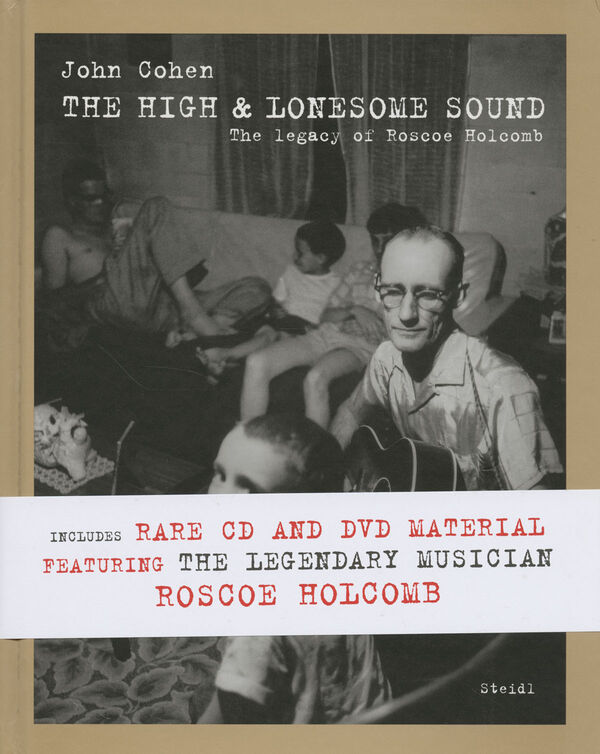 262 pages, 21.5 x 27 cm , 1476 g.
John Cohen | Steidl
John Cohen – The High & Lonesome Sound
The legacy of Roscoe Holcomb
Was €45.00 €20.00
Including VAT, plus Shipping
Transit time: 2 to 6 business days (worldwide)
Add to cart    Add to wishlist
“The music of Roscoe Holcomb transcended daily life. Although it was grounded in Appalachia, in East Kentucky, in his little town of Dais, his music travelled like it was on a path towards a distant star.” John Cohen

In 1959 John Cohen travelled to East Kentucky looking for what he calls “old music”. Cohen asked for names at local gas stations but soon ran out of leads, and drove off the highway onto the next dirt road. Here he stumbled across Roscoe Holcomb playing the banjo and singing on his front porch in a way says Cohen, “that made the hairs on my neck stand up on end”. And so by pure chance began the life-long friendship that is the background for The High and Lonesome Sound. Cohen visited Holcomb frequently over the next three decades, and made many photographs, films and records of his music. In time Holcomb, a poor coal miner by trade, became a regular feature on the American concert and festival circuits. The “strange beauty and discomfort” of his music – a mixture of blues, ballads and Baptist hymns, and unique through his high strained voice – was exposed to a larger audience.

Nevertheless Holcomb died alone in a nursing home in 1981. The High and Lonesome Sound combines Cohen’s vintage photos, film and musical recordings as well as an anecdotal text into a multimedia tribute to this underappreciated legend of American music whose every performance was in Cohen’s words “not just a rendition of music, but a test of something to be overcome”.