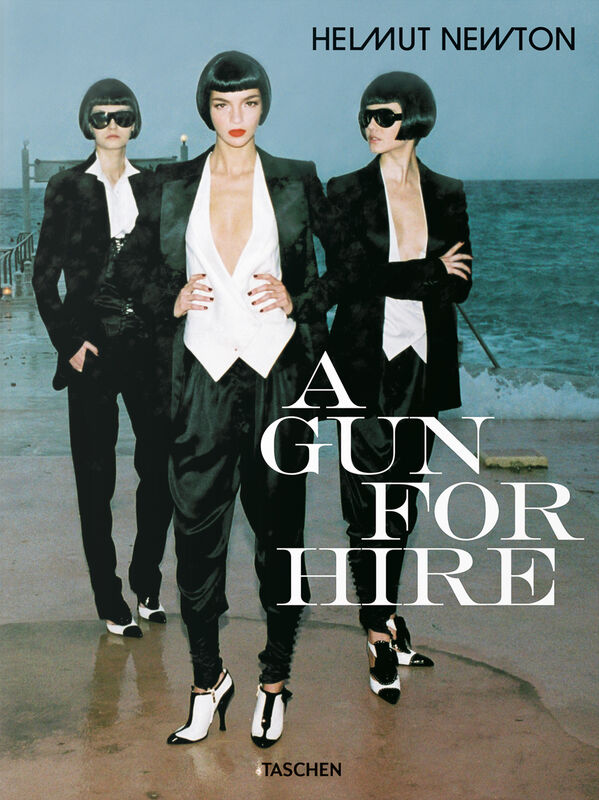 240 pages, 23 x 30.5 cm , 1850 g.
Helmut Newton | TASCHEN
Helmut Newton – A Gun for Hire
€50.00
Including VAT, plus Shipping
Transit time: 2 to 6 business days (worldwide)
Add to cart    Add to wishlist
Helmut Newton did not distinguish compositionally or stylistically between his magazine work and assignments for commercial clients. He ironically referred to himself as “a gun for hire.” That was also the title of June Newton's legendary book about his commercial photography, which is now available in a new edition revised by the Helmut Newton Foundation.

"Some people's photography is an art. Mine is not. If they happen to be exhibited in a gallery or a museum, that's fine. But that's not why I do them. I'm a gun for hire," Helmut Newton told Newsweek in 2004. This prosaic proclamation from one of the 20th century's most celebrated photographers may be perceived as shocking. Still it firmly positions Newton as the no-frills image-maker that he was. His work is so powerful and striking, that it defies categorization. In refusing to call his work "art," Newton leaves us free to do so. Judging from the amount of museum and gallery shows that have featured his work, it is clear that the option has been widely exercised.

A Gun for Hire brings together a selection of Newton's fashion catalog work from the early 1960s to 2003 including work for BiBA (the first fashion catalog in 1962), Chanel, Yves Saint Laurent, Versace, Thierry Mugler, Blumarine, Villeroy & Boch and Absolut Vodka, as well as his last editorial photographs for US and Italian Vogue—encompassing the body of work he made as a "gun for hire."

With an introduction by Matthias Harder and statements by Pierre Bergé, Tom Ford, Josephine Hart, June Newton, and Anna Wintour.

The exhibition HELMUT NEWTON. BRANDS, which will be presented at the Helmut Newton Foundation, Berlin, from December 3, 2022 to May 14, 2023, brings together over 200 photographs by Helmut Newton, including many unknown motifs from Newton's collaborations with internationally renowned brands such as Swarovski, Saint Laurent, Wolford, Blumarine, Chanel, Neiman Marcus, Picot Watches, Absolut Vodka, and Lavazza. These series of Helmut Newton are for the first time part of a comprehensive exhibition of his advertising photography and, with over 100 almost unknown photographs, offer an important contribution to Newton's well-known œuvre.