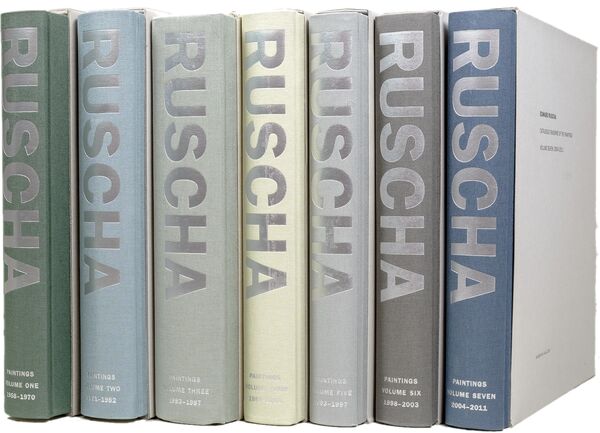 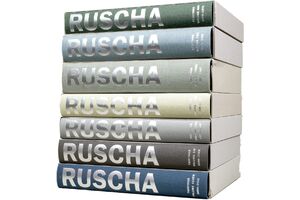 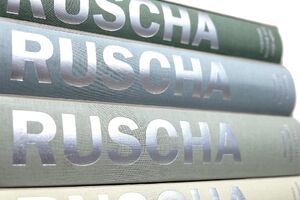 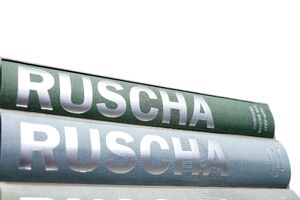 Ed Ruscha | Steidl
Ed Ruscha – Catalogue Raisonné of the Paintings. Volumes 1-7
1958 - 2011
Was €1,155.00 €750.00
Including VAT, plus Shipping
Transit time: 2 to 6 business days (worldwide)
Add to cart    Add to wishlist
The Edward Ruscha Catalogue Raisonné of Paintings is a seven-volume series under the general editorship of the Gagosian Gallery, and is a co-publication between Gagosian Gallery and Steidl Verlag:

Volume 1 contains 137 paintings printed in full color from Ruscha's student period to the Pop- and Conceptual-inflected word paintings of the 60s.

Volume 2 contains entries on 178 paintings completed between 1971 and 1982 – from the artist's crisis at the onset of the 70s, when he “quits painting pictures,” to his first major museum retrospective, which opened in March 1982 at the San Francisco Museum of Modern Art.

The third volume contains 165 paintings, showing a major shift in Ruscha’s direction occasioned by the artist’s use of airbrush techniques to produce dark, atmospheric canvases that correspond to film noir and such Los Angeles writers as Raymond Chandler.

Volume 5 comprises 195 paintings. A highlight is the complete layout of the 1995 Denver Central Library project, which Ruscha described as a rolling historical landscape of Colorado and the West.

The sixth volume documents the 227 paintings and studies for paintings made between 1998 and 2003. Though a number of these works refer in some degree to Ruscha's output of the past two decades, the period inaugurates two major series – the Metro Plots, which diagram streets in Los Angeles and American cities, and the celebrated Mountain paintings.

Volume Seven of the Edward Ruscha Catalogue Raisonné of the Paintings, covering the years 2004 to 2011, comprises 230 paintings and studies that are reproduced in color and accompanied by detailed exhibition and bibliographic histories.