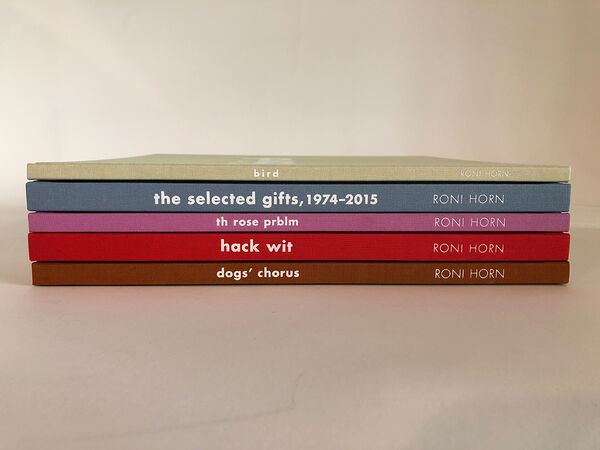 Hack Wit
"Hack Wit is" a playful and complex body of work developed between 2013 and 2015, using clichés or proverbs and watercolor. For each work, the artist made two watercolors of a different proverb, cut them apart and then combined them into one. The Canadian poet Anne Carson wrote the text Hack Gloss in response to the “Hack Wit” drawings.

Selected Gifts
The Selected Gifts, 1974–2015 is a collection of photographs documenting the history of gifts received over the course of the artist’s life. Collected together in this book they form a possible self-portrait.

Rose Prblm
"A drawing in the 'Th Rose Prblm' cuts together two drawings. Each with one of two phrases. Composing these two phrases in their various iterations: “Rose is a rose is a rose” or “a rose is a rose is a rose” with “come up smelling like roses” or “coming up smelling like a rose”, etc. leads to all kinds of nonsense. But it also leads to another sense. I found a lot of humor here, some of it pretty dumb. Composing these phrases into all the possible outcomes became a metaphor for identity. There are 48 drawings and it’s one work. Cumulatively the shades of meaning obtain a complexity and range that stand in for the mutable, changeable nature of identity. I also found that the more I did the more there was." Roni Horn

Dogs' Chorus
'Dogs’ Chorus' presents an important group of recent drawings by Roni Horn. Following up on the 2016 Th Rose Prblm, Horn cuts apart original drawings of texts and reassembles the fragments into compositions that are cumulative, complex and changeable. In Dogs’ Chorus Horn combines a line from Shakespeare’s Julius Caesar with common idioms, playfully questioning the meanings of language and identity.