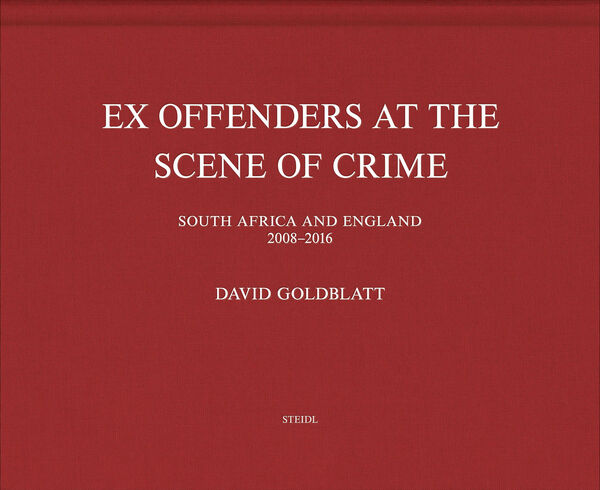 112 pages, 35.5 x 29 cm , 1606 g.
David Goldblatt | Steidl
David Goldblatt – Ex Offenders at the Scene of Crime
South Africa and England, 2008-2016
€75.00
Including VAT, plus Shipping
Transit time: 2 to 6 business days (worldwide)
Add to cart    Add to wishlist
The origins of this book lie in David Goldblatt’s simple observation that many of his fellow South Africans, regardless of their race and class, are the victims of often violent crime. “I have asked myself,” says Goldblatt, “not least in the fear and fury of holdups with knives and guns, who are you? Are you monsters? Are you ‘ordinary’ people—if there are such? How did you come to do this? What are your lives?”

And so began in 2008 Ex Offenders at the Scene of Crime, for which Goldblatt photographed criminal offenders and alleged offenders at the place that was probably life-changing for them and their victims: the scene of the crime or arrest. Each portrait is accompanied by the subject’s written story in his or her own words, for many a cathartic experience and the first opportunity to recount events without being judged. To ensure the integrity of his undertaking, Goldblatt paid each of his subjects 800 rand for permission to photograph and interview them, and any profit from the project will be donated to the rehabilitation of offenders. Ex Offenders also features Goldblatt’s portraits and interviews of subjects in England, made in collaboration with the community arts project Multistory.