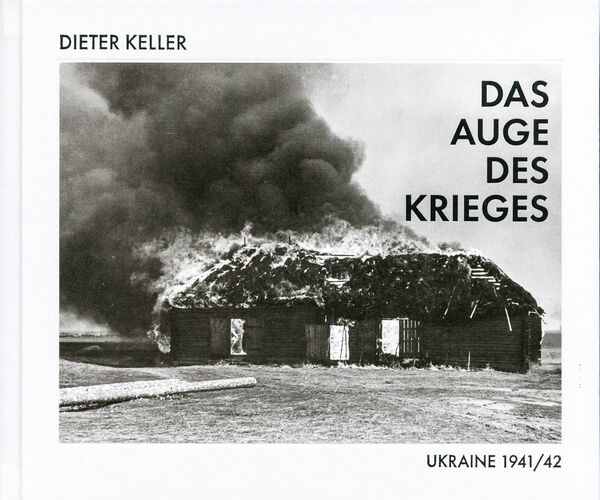 118 pages, 24 x 20 cm , 710 g.
Dieter Keller | Buchkunst Berlin
Dieter Keller – Das Auge des Krieges
Ukraine 1941/42
€38.00
Including VAT, plus Shipping
Transit time: 2 to 6 business days (worldwide)
Add to cart    Add to wishlist
Before and during World War II, Dieter Keller (1909–1985) was a close friend of artists from the New Objectivity and the German Bauhaus movements. Over the years, he cultivated relationships with Willi Baumeister, Alexej von Jawlensky, and Ida Kerkovius. His close friendship with Oskar Schlemmer is documented in more than 90 letters. These contacts shaped his artistic vision and significantly influenced his photographic compositions.

In 1941/42, Keller served as a German soldier in Ukraine and Belarus. Despite a strict military ban on photographing civilians and war victims, he managed to secretly shoot several rolls of film during this period which he eventually smuggled to Germany. Keller used a so-called Fedka camera, a Soviet Leica counterfeit. After the war, he developed the 35 mm rolls at his home in Stuttgart-Vaihingen, enlarging 201 prints as unique pieces. The negatives, produced on a nitrocellulose base, were destroyed by spontaneous combustion in 1958.

From early on, Keller used the media of serial and informal photography to create filmlike image sequences that encourage a subjective experience of reality. The photographic translation of Keller’s images of cruelty and near-apocalyptic destruction into abstract and formal visual constructions doesn’t follow documentary photography's typical emotional flattening and dullness, but rather intensifies subjective involvement. Even by today’s standards, Keller’s photography adheres to a modern-looking visual aesthetic, which on one hand proves the visual influence of his artistic friendships, but also clearly demonstrates that the photographer uses aesthetic perception as a key to his own reality processing and mental coping. As such, his disturbing photographs are embedded in an art history discourse with the European graphic tradition of representing the cruelty of war, as depicted in the horrifying scenarios by Hieronymus Bosch, Francisco de Goya, or Otto Dix.