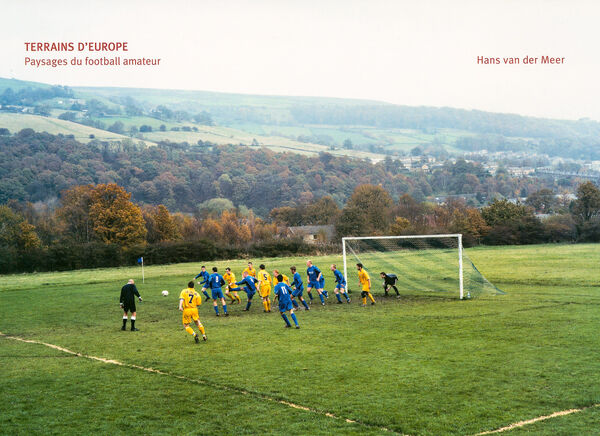 179 pages, 29.8 x 21 cm , 978 g.
Hans Van der Meer | Steidl
Hans van der Meer – Terrains d' Europe
Paysages du football amateur
Was €25.00 €10.00
Including VAT, plus Shipping
Transit time: 2 to 6 business days (worldwide)
Add to cart    Add to wishlist
At the beginning of the 1995 football season, Hans van der Meer (born 1955) set out to take a series of football photographs that avoided the clichéd traditions of modern sports photography. In an attempt to record the game in its original form — a field, two goals and 22 players — he sought matches at the bottom end of the amateur leagues, the opposite end of the scale to the Champions' League. And he avoided the enclosed environment of the stadium and tight telescopic details and hyperbole of action photography. Preferring neutral lighting, framing and camera angles, he chose instead to pull back from the central subject of the pitch, locating the playing field and its unfolding action within a specific landscape and context.

Van der Meer has applied his democratic viewpoint across the playing fields of Europe over the past decade, having travelled to every country with a significant history of the game. His European odyssey has since taken him from small towns in the remote regions of Europe — from Bihariain in Romania to Björkö in Sweden, from Torp in Norway to Alcsóörs in Hungary, from Bartkowo in Poland to Beire in Portugal — and to the fringes of the major conurbations of Greece, Finland, England, France, Germany, Scotland, Switzerland, Holland, Slovakia, Denmark, Ireland, Wales, the Czech Republic, Belgium, Spain and Italy.

These acute and subtle observations of the poetry and absurdity of human behaviour connect the game of football to the basic futility of the human condition. The small tragicomedies are dwarfed by the serenity and permanence of the natural or man-made world that surrounds them but in their pathos can be found the original passion and humanity of the game.