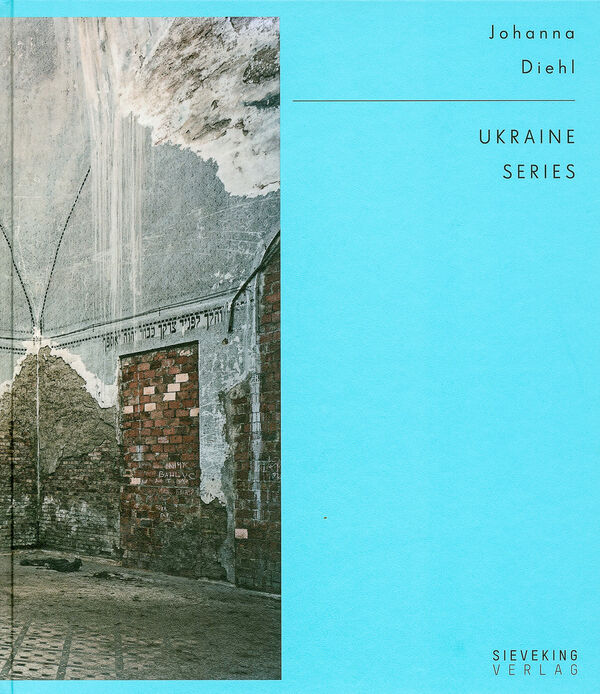 160 pages, 23.6 x 27 cm , 944 g.
Johanna Diehl | Sieveking
Johanna Diehl – Ukraine Series
Was €49.90 €19.95
Including VAT, plus Shipping
Transit time: 2 to 6 business days (worldwide)
Add to cart    Add to wishlist
In 2013, the artist Johanna Diehl visited former synagogues in the territory of what is now Ukraine. Partially destroyed during the German occupation, the buildings were completely repurposed during the Soviet era: as auto repair shops, vinegar factories, clinics, cinemas, sewing workshops, gymnasiums, or KGB prisons. The structures plainly spell out the inconsiderate demonstrations of power exercised by one ideology or another over the synagogue as a religious, cultural space.

Sometimes, a bricked-up Torah niche, or a historical ceiling mural peeping out from beneath a crumbling coat of paint hint at the richly religious life that blossomed in these spaces for centuries. The sensitive, yet unsparing photographs, taken with a large-format camera, are enriched by very personal literary texts by Yuri Andrukhovych, Ukraine’s most renowned author today. Since childhood, he has been familiar with many of the sites Diehl visited.

Johanna Diehl, born in 1977, lives and works in Berlin. Her works are shown in solo and group exhibitions around the world and can be found in both private and public collections. She is the recipient of numerous awards and grants.

Yuri Andrukhovych, born in 1960 in Ivano-Frankivsk, in western Ukraine, is a novelist, poet, essayist, and translator. He is considered one of Ukraine’s most important contemporary authors and is among the leading intellectual voices of his country. He was awarded the Hannah Arendt Prize in 2014.