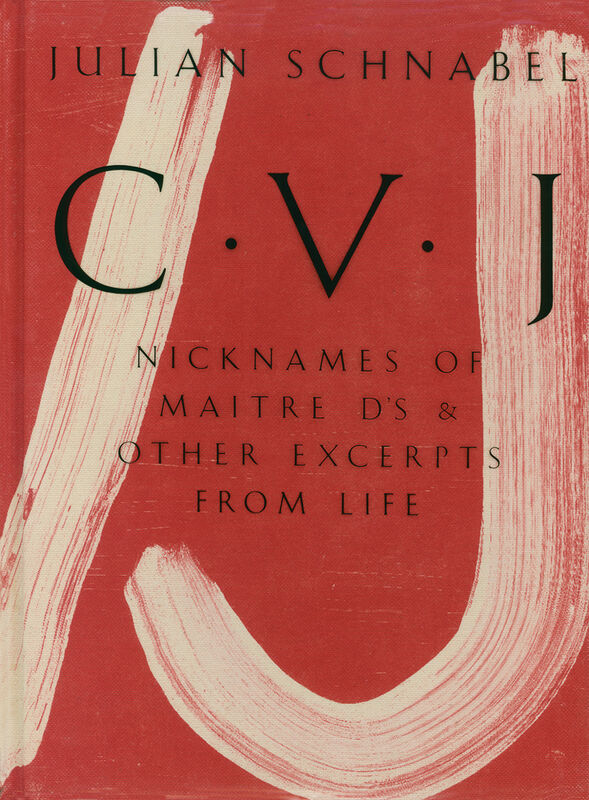 222 pages, 23.5 x 31.3 cm , 1622 g.
Julian Schnabel | Hatje Cantz
Julian Schnabel – CVJ (sign.)
Nicknames of Maitre D's & Other Excerpts from Life
Was €125.00 €39.80
Including VAT, plus Shipping
Transit time: 2 to 6 business days (worldwide)
Add to cart    Add to wishlist
At thirty-six, Julian Schnabel was not only represented in the most important exhibitions of his time; retrospectives of his works were already being celebrated in major museums such as the Stedelijk Museum, the Tate in London, or the Centre Pompidou in Paris. He writes this book, CVJ, and gives an account of his life: how he leaves Texas in 1973 to return to his hometown of New York City, hangs out in Max’s Kansas City, meets Sigmar Polke, Blinky Palermo, Ross Bleckner, and numerous other people in the scene, and even travels to Europe to study the Old Masters—experiences and observations that are both poetic and amusing to read. And at the same time it is fascinating to see the oeuvre he had produced up to that point: the Plate Paintings with their splintered surfaces, paintings in oil and wax, on velvet and tarpaulins, with “dirt” and cracks and objets trouvés that project into space, drawings, and sculptures. What is striking is their influence on younger generations of artists and on the current debate on painting.
More books from Julian Schnabel view all
Julian Schnabel – CVJ