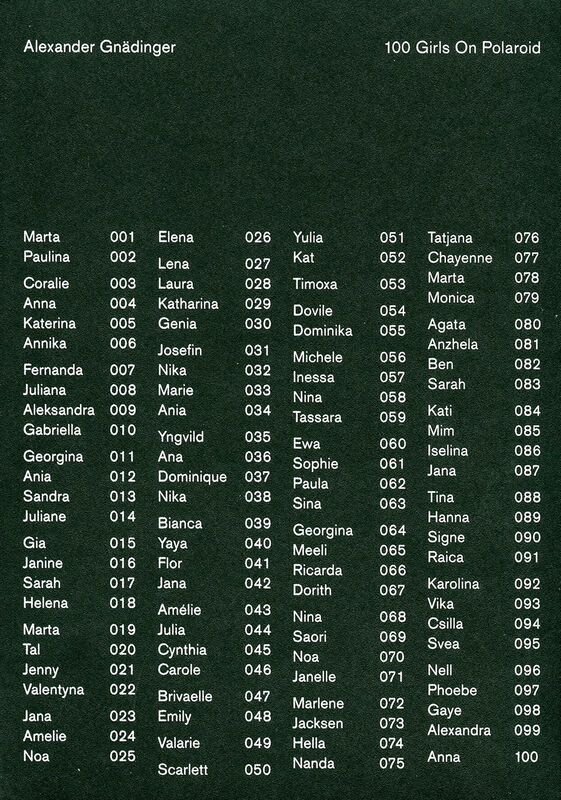 476 pages, 24.7 x 34.7 cm , 2590 g.
Alexander Gnädinger | seltmann+söhne
Alexander Gnädinger – 100 Girls on Polaroid
Was €69.00 €19.80
Including VAT, plus Shipping
Transit time: 2 to 6 business days (worldwide)
Add to cart    Add to wishlist
Over recent years, the internationally renowned fashion photographer Alexander Gnädinger has been devoting himself to a free project to act as a counterweight against his commercial work. Extremely stylized, aesthetically condensed images, such as those created for his customer Adidas for years, are his trademark. For his project “100 Girls on Polaroid,” he embarked on a journey to rediscover the original fascination of photography - capturing an authentic moment.

He asked 100 girls to pose in the way in which they consider themselves to be beautiful. In their professional lives, models are the projection screens for society’s ideas of beauty. They are depicted by the photographer, a whole host of stylists, and hair and make-up artists according to the customer’s wishes. Many of the models shown in the book are known from cover pictures and campaigns. Instead, Alexander Gnädinger was looking for the girls’ own individual perception and self-expression. You can sense this on every single page in the book. Shortly after Alexander Gnädinger began the project, he received the surprising news of the collapse of Polaroid.

The Polaroid medium is currently experiencing a renaissance thanks to its authenticity. From Polaroid’s bankrupt estate, Gnädinger bought the last remnants of the black cardboard box that protects the Polaroid film in every cassette. This cardboard box became the dust jacket for the book and gives the book a unique look.