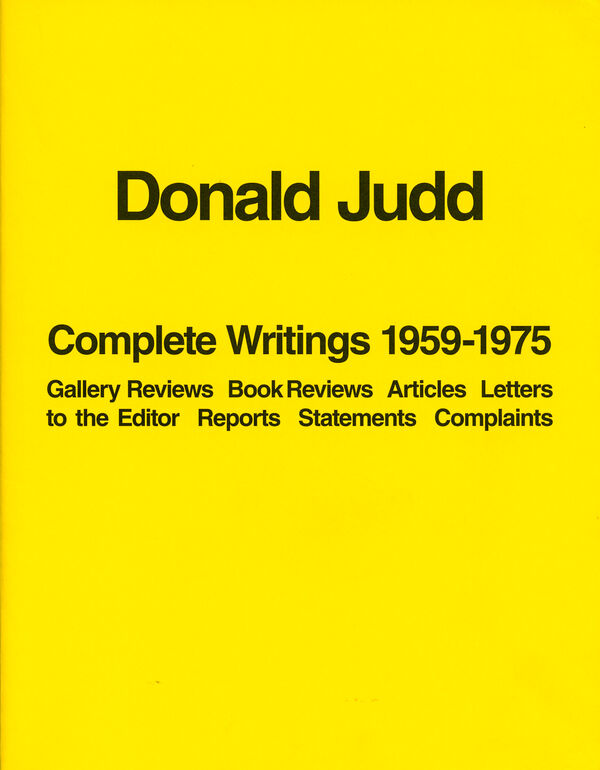 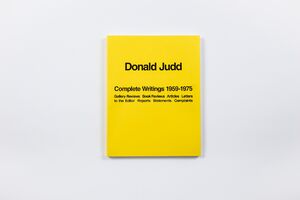 "Complete Writings 1959–1975" was first published in 1975 by The Press of the Nova Scotia College of Art and Design, and since then it has been the primary source for Donald Judd’s early writing. Working as an art critic for the magazines Arts, Arts Magazine and, later, Art International, Judd regularly contributed reviews of contemporary art exhibitions between 1959 and 1965, but continued to write throughout his life on a broad range of subjects.

In his reviews and essays, Judd discussed in detail the work of more than 500 artists showing in New York in the early and mid-1960s, and provided a critical account of this significant era of art in America. While addressing the social and political ramifications of art production, the writings frequently addressed the work of such artists as Jackson Pollock, Kazimir Malevich, Barnett Newman, Ad Reinhardt, Lee Bontecou, Yayoi Kusama, John Chamberlain, Dan Flavin, Kenneth Noland and Claes Oldenburg. Judd’s essay "Specific Objects," first published in 1965, remains central to the analysis of the new art developed in the early 1960s. Other essays included in this publication are "Complaints I" (1969), "Complaints II" (1973) and his previously unpublished essay "Imperialism, Nationalism and Regionalism" (1975), all of which establish the polemical importance of Judd’s writing.