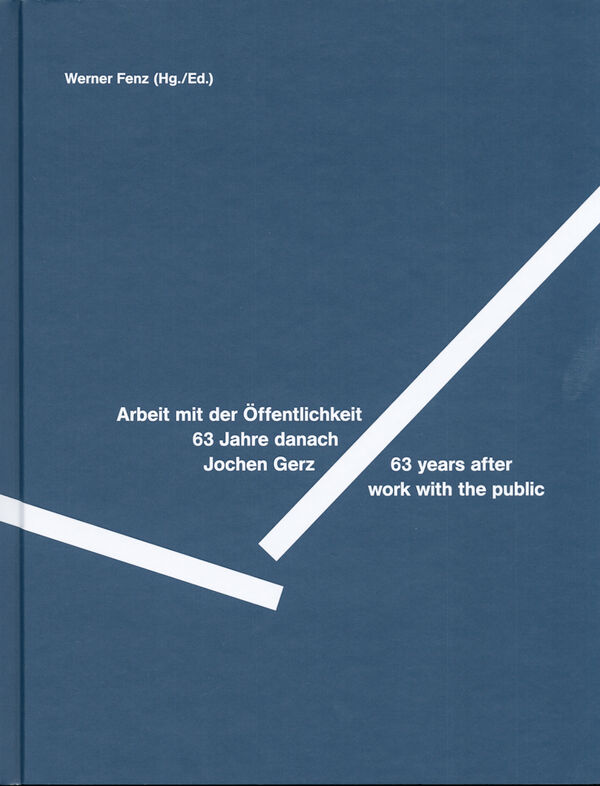 192 pages, 19 x 24.5 cm , 814 g.
Jochen Gerz | Verlag für moderne Kunst
Jochen Gerz – Arbeit mit der Öffentlichkeit. 63 Jahre danach
Work with the public
Was €28.00 €10.00
Including VAT, plus Shipping
Transit time: 2 to 6 business days (worldwide)
Add to cart    Add to wishlist
In “63 years after”, a work reliant on public input and collaboration, Jochen Gerz once again addressed the issue of memorials: with the demand that these be used to decrease the public’s emotional distance to the commemorated events. The project provided readers of Graz-based daily newspaper “Kleine Zeitung” with an extensive archive of photographs showing everyday scenes from the Nazi period in Styria. Based on this visually recorded history, the artist extended an invitation to the reading public:

24 images, with additional texts by the representatives of the Styrian state parliament, were to be selected. However, the installation of the sculptural objects on site was rejected by four Styrian communities and two locations in Graz. The FPÖ party politician responsible for Road Administration categorically declined their erection four years after the memorial concepts were presented to parliament, in June 2014 ― despite several petitions having been submitted that the authorization to install the works be extended. Jochen Gerz concedes the capacity of authorship to the public, and not just in this project. Public input is a central concern for the artist, who sees hermetically sealed memorial sculptures as problematic.

The publication looks both at the current project “63 years after” and the unique piece “The Geese of Feliferhof ” * ― planned for Graz but not carried out ― as well as his international works including “Monument against Fascism” * in Hamburg-Harburg, which was lowered into the ground to make it disappear, “Square of the invisible Monument” in Saarbrücken, or the “The living Monument of Biron”.