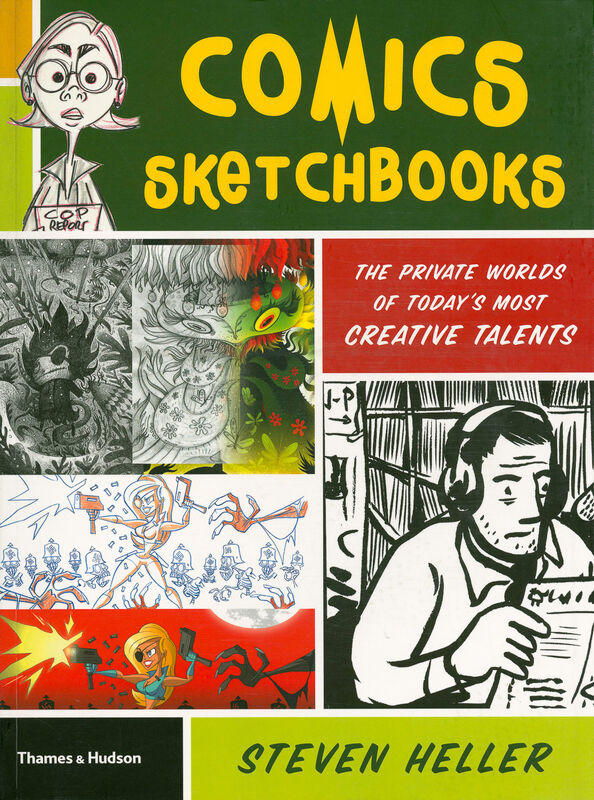 352 pages, 22 x 29.7 cm , 1700 g.
Steven Heller | Thames & Hudson
Steven Heller – Comics Sketchbook
Was €35.00 €15.00
Including VAT, plus Shipping
Transit time: 2 to 6 business days (worldwide)
Add to cart    Add to wishlist
From cartoons to the graphic novel, from humour to super-heroes, comics are the world's most popular form of illustration. What we rarely see is the thinking – the image-and-word play, narrative sequencing, or just plain doodling – that leads to fully formed visual ideas and stories. "Comics Sketchbooks" presents the private notebooks of more than 80 of the planet's most inventive, innovative and successful artists, alongside new talents and emerging illustrators, in a breathtaking range of imaginative output.

Featuring political cartoons, offbeat graphic stories, the ‘funnies’, underground comics and more, this jam-packed celebration of comic art presents a wide spectrum of illustrations in vibrant visuals, deft texts and arresting human observation. Commentary by Steven Heller, the world’s leading authority on graphic design and illustration, reveals secrets of the trade and the minds behind these private worlds.

Professionals, students, anyone in the visual industries – and indeed all those who simply love comics – will find a wealth of inspiration in the visual excitement, mind-blowing creativity – and fun – of "Comics Sketchbooks".

Steven Heller is co-chair of the MFA Design: Designer as Author programme at the School of Visual Arts, New York. He is the author of many books, including "Stencil Type", "Graphic", "Typography Sketchbooks", "New Ornamental Type" and "New Vintage Type", all published by Thames & Hudson.