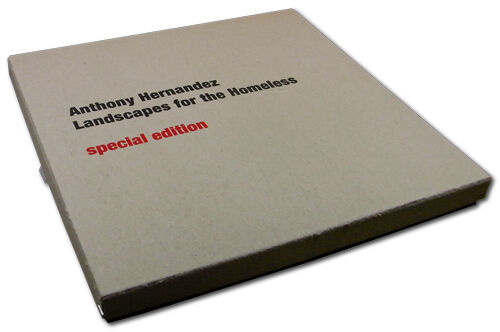 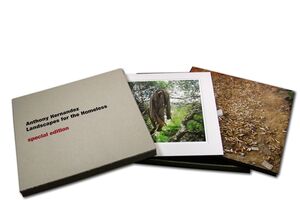 Anthony Hernandez | D.A.P.
Anthony Hernandez – Landscapes for the Homeless | special ed.
Book + Print
€380.00
Including VAT, plus Shipping
Transit time: 2 to 6 business days (worldwide)
Add to cart    Add to wishlist
Following two years of study at East Los Angeles College and two years of
service in the United States Army as a medic in the Vietnam War, Hernandez took up photography in earnest around 1970. He walked the streets of his native Los Angeles, observing its inhabitants. In order to work quickly and intuitively, he would pre-focus the camera and then wait for subjects to come into the zone of focus--only briefly bringing the camera to his eye as he walked past them.

Most of his pictures since the mid-1980s are devoid of human subjects -although their presence is felt. Projects such as Landscapes for the Homeless (1988-91), Waiting for Los Angeles (1996-98), and Everything (The Los
Angeles River Basin) (2003-4) documented how the city‘s human presence has been
reduced to the traces and debris left by destructive social forces.

Over the last twenty years Anthony Hernandez has become known as a creator of a unique blend of social commentary, urban documentary, and landscape photography.

This is a book of portraits, not of people, but of places. The habitats of the homeless in Los Angeles. Hernandez paints a vivid picture of American social irresponsibility in the volatile setting of an urban wasteland.

For this book, long
believed to be out of print, Anthony Hernandez has produced an exclusive edition of an original
colour print (22,8 x 21,5 cm, motif: 19 x 19 cm).

The print is numbered, dated and signed on the back. It is placed in a passepartout and will be delivered in a secure
carton box.